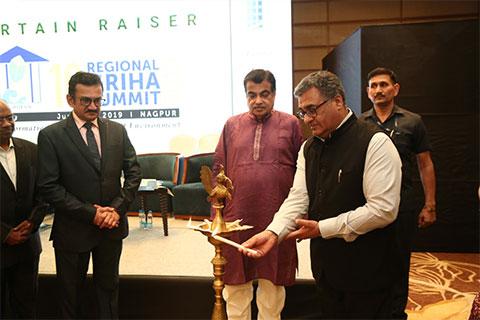 Nagpur, 14th June, 2019: GRIHA Council, a green building rating body in India, today signed seven Memoranda of Understanding (MoU) with the Government of Maharashtra, Regional Chief Engineers and Public Works Department to initiate the second phase of the PWD-GRIHA green building initiative in Maharashtra. This would include rating of 525 existing government buildings on the parameters of GRIHA Existing Building rating system, along with training and capacity building of PWD officials. Earlier, 300 existing government buildings were rated in the first phase of the initiative. Maharashtra is the first state in India to lead the initiative of transforming its existing and to-be built infrastructure at a large scale by committing upcoming structures to green rating system, training its officials to evaluate building performance and offering incentives to builders for adopting green practices. GRIHA also has a cell in PWD that helps to build capacity of officials as green building evaluators, thus accelerating the process of greening urban spaces.

The MoU today was signed on the occasion of 10th Regional GRIHA Summit in Nagpur – a full-day event co-created with Public Works Department, Government of Maharashtra in the presence of Mr Nitin Gadkari, Hon'ble Minister of Road Transport & Highways and Micro, Small and Medium Enterprises. Mr Gadkari also launched policy guidelines to integrate sustainable practices while operating buildings to ensure their sustainability by enhancing resource efficiency.

On the occasion, Mr. Nitin Gadkari, Minister for Road Transport & Highways, Shipping Ministry of Micro, Small and Medium Enterprises said, “Buildings account for a substantial part of energy consumption and greenhouse gas emissions. Green buildings result in longevity, improve productivity and enhance the overall quality of life. I would like to congratulate the GRIHA Council for undertaking this noble initiative which can prove to be a game changer in our efforts towards a greener future."

The conference also celebrated the successful culmination of the first phase of the PWD-GRIHA Green building initiative, which was signed on 16th January 2019, to rate 300 existing government buildings on the parameters of GRIHA EB (Existing Building) rating system. The latest project 'Maharashtra Sadan in New Delhi' has been rated as 4 star under GRIHA EB.

Ratings were awarded to eligible projects and individual awards were conferred to PWD officials who had displayed exemplary initiative during the course of the activity.

On the occasion, Mr Sanjay Seth, CEO, GRIHA Council, said, “We are honoured to partner with the Government of Maharashtra in this initiative. It is heartening to see that the state is committed to large scale transformations in the urban built environment. This small initiative in its first phase, led by the public works department in partnership with the GRIHA Council has led to an annual reduction of nearly 2721 tonnes of carbon emissions which is equivalent to eliminating 600 vehicles from the roads."

Centred on the theme, 'Transformation strategies for built environment', the summit focussed on the impact of incorporating sustainability initiatives into functioning public buildings. It was designed to create an opportunity to embark on multi-stakeholder partnerships, serve as a platform for knowledge sharing and networking among individuals representing government, academia, civil society organizations, architecture, engineering, and construction management.

GRIHA Council is an independent, not-for-profit society jointly set up by The Energy and Resources Institute (TERI) and the Ministry of New and Renewable Energy (MNRE), Government of India to promote and administer GRIHA, the indigenous rating system developed by TERI, which was adopted by MNRE as the national rating system for green buildings in India. The tool measures the performance and environmental impact of a building based on a set of predefined criteria and assigns a rating between one and five stars. GRIHA is a part of the mitigation strategy for combating climate change in India's “Nationally Determined Contributions" submitted to United Nations Framework Convention on Climate Change (UNFCCC) by the Ministry of Environment, Forests and Climate Change, Government of India.