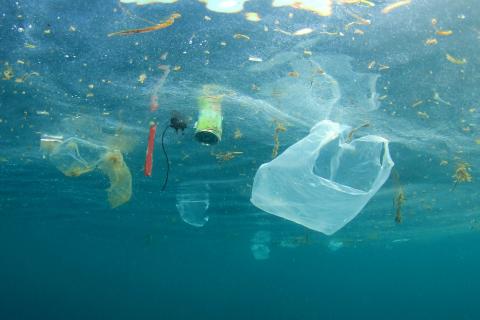 Right from its discovery in 1907, plastic has played a critical role in our lives and continues to assert its presence even today. A so-called wonder product of the twentieth century, this entity is gradually choking our environment and polluting our mountain ranges and seas.

Nobody knows the exact time over which plastic disintegrates; it may take up to 450 years or even more. Due to its low cost, its production is high and its dangerous, toxic qualities are ignored. According to statistics, less than one-fifth plastics are recycled globally, leaving more than 80 per cent of the production to find its way into landfills or oceans.

Plastics are killing mammals directly through entanglement or ingestion or are infiltrating the food chain and killing plant life, and by extension us. In a year, more than 100,000 marine creatures die from plastic entanglement.1 Tens of thousands of whales, birds, seals, and turtles are killed every year due to plastic bags being disposed of in the marine environment, as they often mistake plastic bags for food. Researchers have found that 95 per cent plastics are entering the oceans by flowing through major rivers, out of which eight are found in Asia.2

The dilemma as to why a complete ban on plastics has failed is because the entity often provides functionality that cannot be easily or economically replaced by other materials.

Plastic is durable, easy to produce, lightweight, unbreakable, odourless, and chemically resistant. Its low manufacturing cost and durability are the two main factors responsible for the industry’s rapid growth.

Asia is the biggest plastic manufacturer constituting half of the world’s production (See Figure 1). In 2010 the global plastic production was around 275 million tonnes, out of which 220 million tonnes have been discarded in landfills or oceans.3 As the use of plastics has increased over the years, they have become a larger part of our nation’s municipal solid waste. India alone generates 25,940 tonnes of plastic waste a day, which accounts for more than 10 per cent contribution towards the generation of plastic.4 Clearly, the problem lies not in its extensive production but in our mismanagement as consumers, the ineffective recycling policies, and lack of producer responsibility. Moreover, the pace of up gradation, innovation of waste management infrastructure is not at par with the rapidly increasing levels of plastic waste.

With the help of an informal chain of ragpickers and kabaadiwallahs or scrap dealers, plastic bottles, jars, containers, etc., find their way back into the reusing and recycling economy. However, there is a concerted effort to increase the recycling of rigid plastic packaging by companies as well but there are other single-use plastics, such as bags, candy wrappers, tobacco sachets, soap wrappers, and shampoo sachets, which are either too difficult or not lucrative enough to collect.

Another example is the increasing packaging waste with the introduction of the e-commerce industry, which is evident from the fact that almost 40 per cent of the entire production, is for packaging.5 The consumer base of the e-commerce industry is growing as it is inexpensive, convenient, time saving, and so on. Any item ordered online comes packed in a plastic bag, which adds to the increasing plastic waste.

Fundamentally, high levels of recycling with reduction in use, reuse, repair, or re-manufacturing can allow for a given level of product service with comparatively lower material inputs.

Over the years, initiatives have been taken at a global level to reduce or eliminate the consumption of single-use plastic, which are gaining momentum. China, the highest producer of plastic in Asia, has banned all thin plastic bags and started charging retailers a tax on thicker bags. The Chinese government has said to have seen a 66 per cent drop in plastic bag use.6

Understanding the gravity of the situation, the Government of India commemorated the World Environment Day, 2018, in its truest essence, that is, through a series of activities and events that aim to generate a substantial public interest as well as participation.

The pledge includes transforming 100 monuments across the country\ into plastic- and litter-free zones.7

Even the tourism ministry rose to the occasion by pledging to avoid plastic straws at public places. India as a fast-growing economy, and with a population of 1.3 billion, is a significant contributor to ocean plastic. It is also struggling to manage its waste streams. The ban on plastic cannot be a success until each one of us is determined and willing to give up using plastic. Prime Minister Shri Narendra Modi has launched a mission to eliminate the single-use plastic in the country by 2022 and it is every individual’s duty to bring a positive change in the environment.8 The urgency to decline plastic is now being given its due attention by the government and the public.

Deals at a nation-wide and organizational level have been undertaken to reduce plastic pollution by 2025. Coca-Cola has announced its new sustainable strategy wherein the recycled content in their bottles will be increased from 25 per cent to 50 per cent by the year 2020.9 Similarly, PepsiCo, Amcor, and Unilever have also pledged to convert to 100 per cent reusable, recyclable, or compostable packaging by 2025. Shifting consumers from conventional plastic to recycled plastic is further escalating the growth of the plastic waste management market.

Professor Rajagopalan Vasudevan, a professor of chemistry at Thiagarajar College of Engineering, Madurai, also known as the India’s ‘Plastic Man’ has created a stone block with a plastic coating known as ‘plastone’ (See Figure 4). Each plastone block comprises 300 plastic carry bags and around six PET bottles.10 One of the foremost advantages of plastone is its non-porous nature and the ability to prevent water penetration, and hence finds its use in road constructions.

Banning plastic is not the only solution as it will affect the lives of many people, especially the lowerincome group. Retailers have started replacing plastic bags with jute/ cloth/ paper bags along with bioplastics that might play a major role to bring a change in our daily lives. The other alternatives are paper packaging, cardboard packaging, bamboo cutlery, etc., which ought to be well researched and implemented.

Along with focusing on eliminating plastic, we should also be concerned about its mishandling and the ways in which recycling and reuse can be made mainstream. Widespread awareness and clean-up campaigns should be launched globally along with targets so as to map the progress.

Biodegradable plastic and the ‘zero-waste’ philosophy are being embraced by the government and the people. Given this, the plastic recycling industry is slated to boom in the coming years. This revolution will also enable more sustainable ways of preserving raw materials, reduce the landfill problems, and consume less energy in the manufacturing of plastic.

With the help of various eco-friendly alternatives, one can make a shift to a plastic-free lifestyle through the use of items, such as bamboo toothbrush, edible cutlery, biodegradable bags, biodegradable sanitary napkins, wheat straws, and so on.

The best way to deal with the problem of waste is to create a feasible plan in which things after they have been used should be returned to the retailer, who in turn will return it to the manufacturers. This reverse cycle once established will be a great success.

Nothing can change without collective efforts and reform at the grassroots level. Such measures, no matter how small, will definitely contribute towards reducing plastic pollution and will go a long way in saving our Mother Earth.